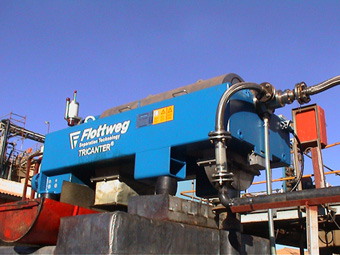 The occurrence of crud is a persistent problem in Solvent Extraction (SX) systems. Crud is a solid stabilised emulsion which most commonly accumulates at the aqueous/organic interface in the settlers of solvent extraction cells. It is caused by a variety of substances entering the SX circuit, ranging from wind-blown dust, to entrained solids from the leaching stages and impurities in the solutions, and even insects attracted by the lights in the SX plant. The crud can interfere with phase separation and severely reduce the efficiency of the SX process. If allowed to build up in the settlers, crud can eventually start moving to the next mixing stage. This can rapidly cause a cascade effect resulting in severely increased physical entrainment which can cause contamination of electrolyte with leach solution and with the organic phase. The transfer of organic to the electro-winning cells can cause ‘cathode burn’. The entrainment of electrolyte into the extraction stage can result in loss of pH control in the extraction circuit which will cause a drop in extraction efficiency. On the other hand entrainment of organic in the raffinate will result in organic losses to the leach circuit. Even when well controlled, organic solvent losses, resulting from the essential removal of crud from the cells, can cost refineries from hundreds of thousands to millions of dollars per annum. While removal of crud from the SX system does not normally pose a major problem, crud typically has an organic content in excess of 50%. Crud is usually manually pumped out from the interface in the settlers and stored for organic recovery. The resultant sludge is often filtered in pre-coated filter presses, but these rapidly blind and seldom produce anything better than a sludge containing large quantities of organic.

The Flottweg TRICANTER® TRICANTER® provides an efficient, reliable system for recovering clean organic from crud. Crud removed from the settlers is fed to the TRICANTER®, which removes the crud, as well as the entrained aqueous solution, to return clean organic solution to the process. The strength of the TRICANTER® is its ability to recover virtually all of the organic entrained in the crud.

A movable weir ensures accurate control over the phase separation, allowing operators to adjust for process fluctuations. The separated solids are conveyed by the scroll to the conical end of the bowl and are discharged. A variable speed drive permits changes in the rate at which the crud is removed, maximising the removal of organic from the crud. Typically the crud discharged in this manner is a slightly damp granular solid, with in excess of 95% of the organic having been recovered.